How Catholic Academy Trusts are structured

Academies are state schools funded directly by the government, rather than maintained by a local authority.  Each academy is run by an academy trust, a not-for-profit company, registered at Companies House with named Members and Directors, which employs the staff and is responsible for the performance of its schools.  An academy trust which runs more than one academy is known as a multi-academy trust (MAT).  The term used by the Diocese for a MAT is a Catholic Academy Trust (CAT); this emphasises its status as a group of Catholic schools combining in a legal structure in solidarity.

The Directors of the academy trust, often referred to corporately as the Trust Board, are the key decision-makers in the CAT: legal responsibility for the performance of each academy rests with them.  Strategic rather than operational, they delegate responsibilities to the Catholic Executive Officer, Local Governing Bodies and headteachers of each school.  They in turn are held to account by the Members, who are the guardians of the CAT, but who have a minimal role in its actual running.  Every CAT will have the same five Members: the Diocesan Ordinary, the Chair of the Diocesan Education Commission, the Diocese's Chief Operating Officer/Financial Secretary, the Director of Education and The Westminster Roman Catholic Diocese Trustee (i.e. the corporate body).  In this way, the Catholic integrity of CATs runs through every element of its governance structure.

The Catholic Executive Officer provides strategic vision for the performance and development of all the academies within the CAT; headteachers run their schools in conjunction with Local Governing Bodies as laid out in the Scheme of Delegation.  The body to which they are accountable is not the local authority, but the Trust Board.

A hub is a group of schools, which have converted to become academies, working together within a CAT.  The arrangement can be theme-based or geographical.  Any hub is part of the same legal entity as the CAT, under the Trust Board of Directors and reports to the CAT’s CEO.  It can have an Executive Leader with delegated powers under a scheme of delegation.  Back office functions can be shared among schools in the hub.

A hub can be thought of as a subsidiary company of the CAT itself.  The Diocese’s preference is that hubs would be set up for an initial two- to three-year period and help the transition process for groups of schools which have a history of collaboration as they move into a Family CAT. 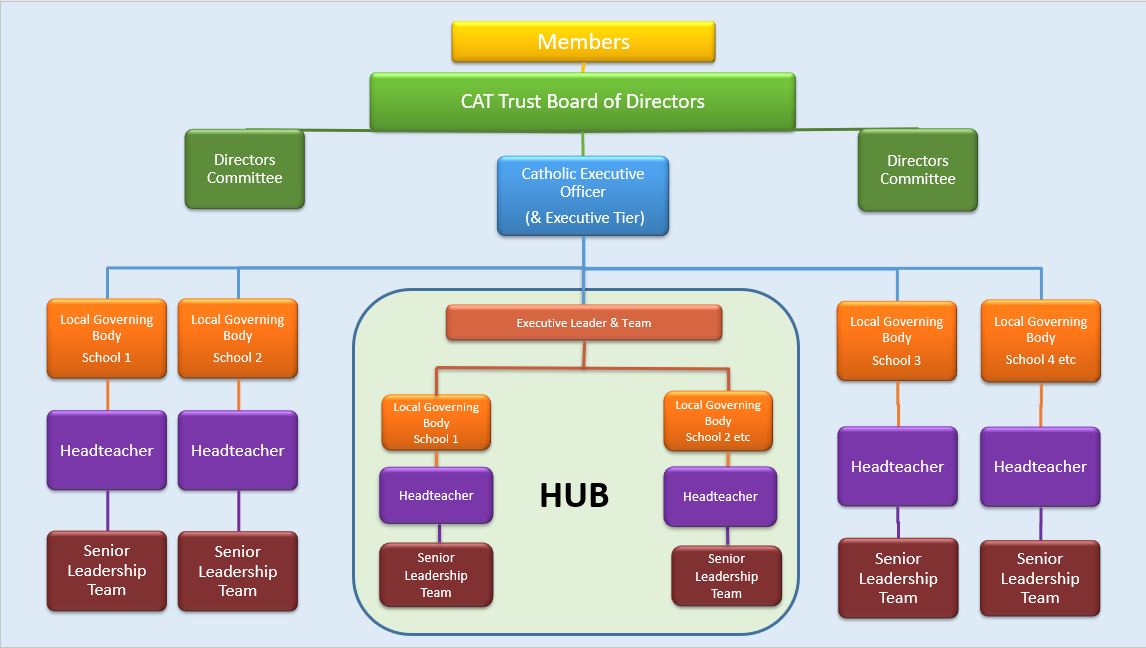